“Machinery Pete, I have an off the wall question. When I was a kid in the late '80’s there was a man that came to the rodeo that was a daredevil act. He had an old combine that had been modified to jump a line of cars similar to what a monster truck does. It was called “the silver bullet”. I’m guessing that it was a gleaner. Have you ever heard of this? I’d love to find a picture of it or a video to show my kids. Thank you, sir!”

My reply: You mean this one? 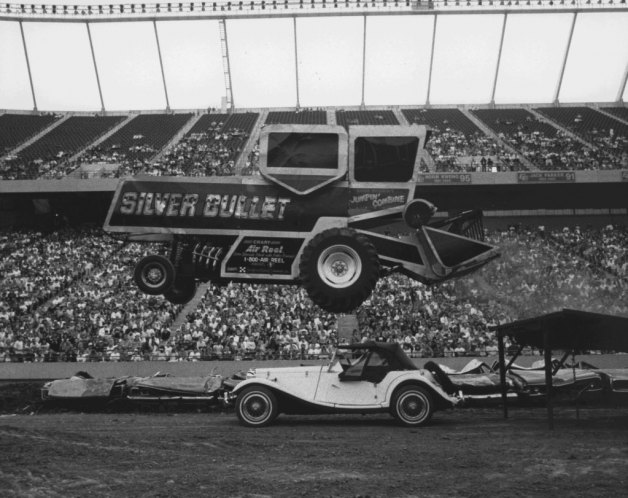 Found this pic after little poking around online. Apparently it was also featured in a 1987 Coors Beer TV commercial, here’s the video: https://www.youtube.com/watch?v=eA5Y8jyKNxw 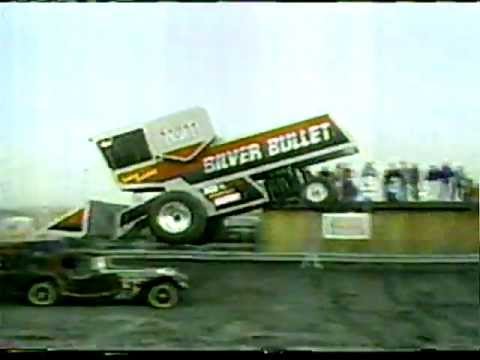 Apparently the “Flying Combine” made it’s 1st jump in Fargo, ND back in 1985 at the Red River Valley Fairgounds in front of an estimated crowd of 6,000 folks. The machine had a drag racing car engine. I found a fantastic old Farm Show magazine article with more details from the Flying Combine’s maiden jump…over a classic car no less. Here’s a link to read more: https://www.farmshow.com/a_article.php?aid=3743 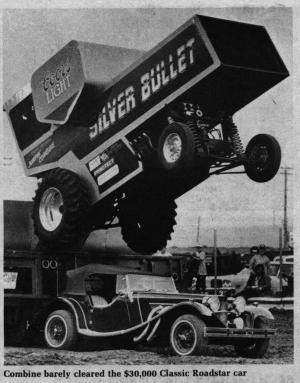 Jon F. was very happy to hear the story on the Flying Combine he remembered seeing as a kid:

“I saw it at the Ken Lance PRCA Rodeo. The arena is located east of Ada, OK. They put on a heck of show. I was probably 5 or 6 years old. Thanks for running it down! I’m a little disappointed that it isn’t a real combine though. But, it does explain a lot. I always wondered how it could stay together through that kind of a bounce. Thanks again!”

I own the '76 international truck that pulled this attraction from town to town.

Very Cool! What model IH truck is it? Got any pics of it? How long you owned it?

My father bought it a few years ago but he passed away last year from cancer. It’s a 2 ton truck. I have pictures and the title. My father and uncle drove it here from where they purchased it. 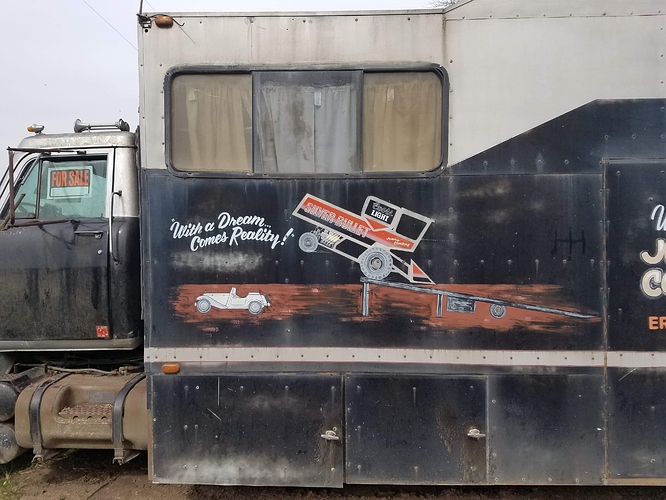 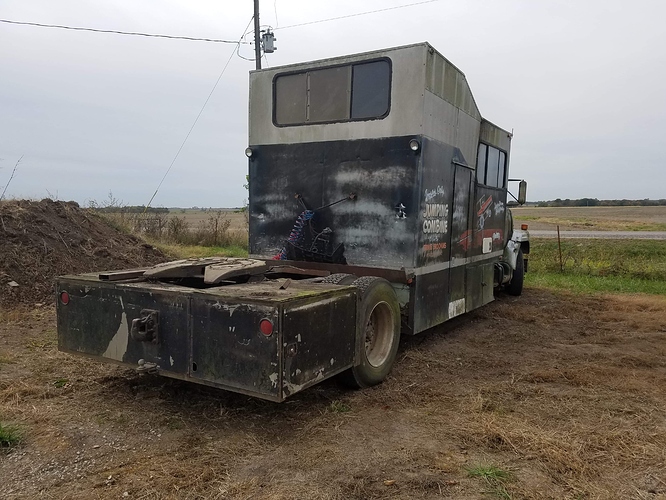 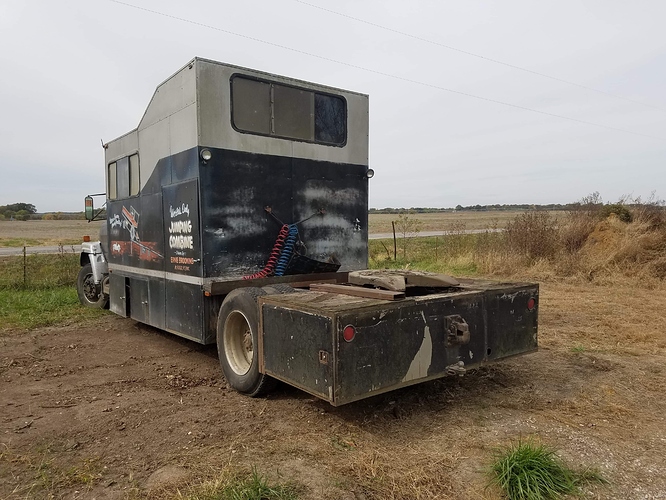 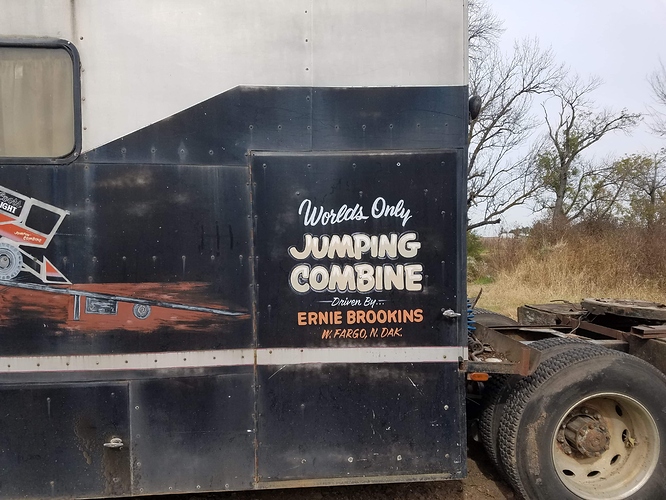 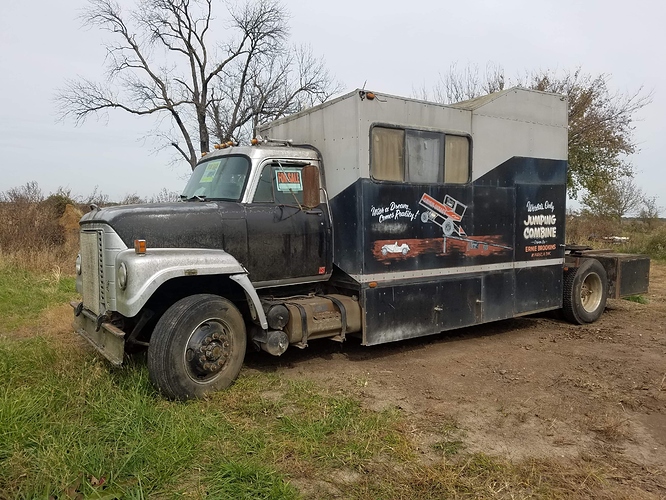 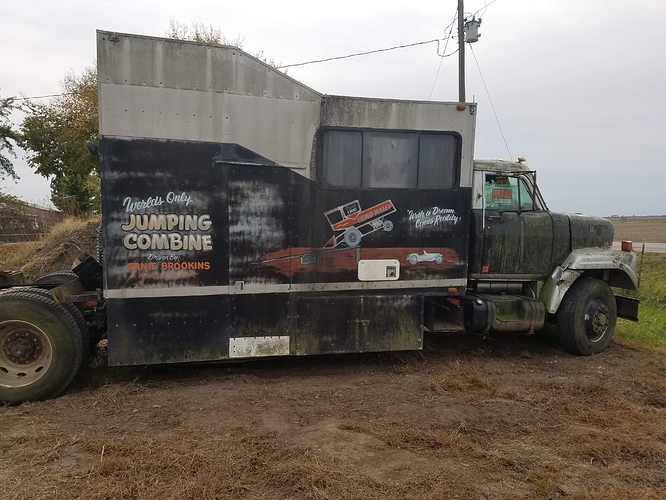 Mike, I just posted your cool '76 truck pics on our Machinery Pete Facebook/Twitter/Instagram sites. Just got a msg from Facebook follower wondering if the truck could be for sale?

We built that truck from scratch on a 2 ton truck chassis that we stretched the frame on. The door on the passenger side opened into the bathroom area; up several steps was the main floor with living room, tv, and kitchen. The door on the rear of the driver’s side was to a walk-in tool box. From the living room, the bed was above the bathroom and tool box. The lincoln arc welder, generator, etc. were in the side compartments in the back. Spent many hours in that truck!
The combine was also built from scratch, copying a gleaner. We jumped it all over the U.S. for over 5 years, at many major state fairs, including Oklahoma, Kansas, Nebraska, Iowa, Minnesota, North Dakota, South Dakota, and Montana. A lot of the jumps were outside, but we also jumped it indoors in many hockey arenas. In Boise, Idaho, we jumped in a basketball arena. Hit the car several times.
I’ll dig up some photos to upload in a bit. 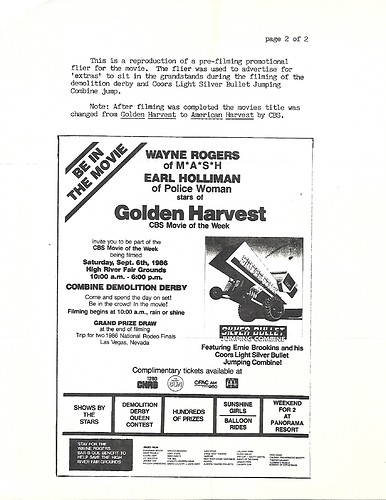 Here is the hauler brand new! 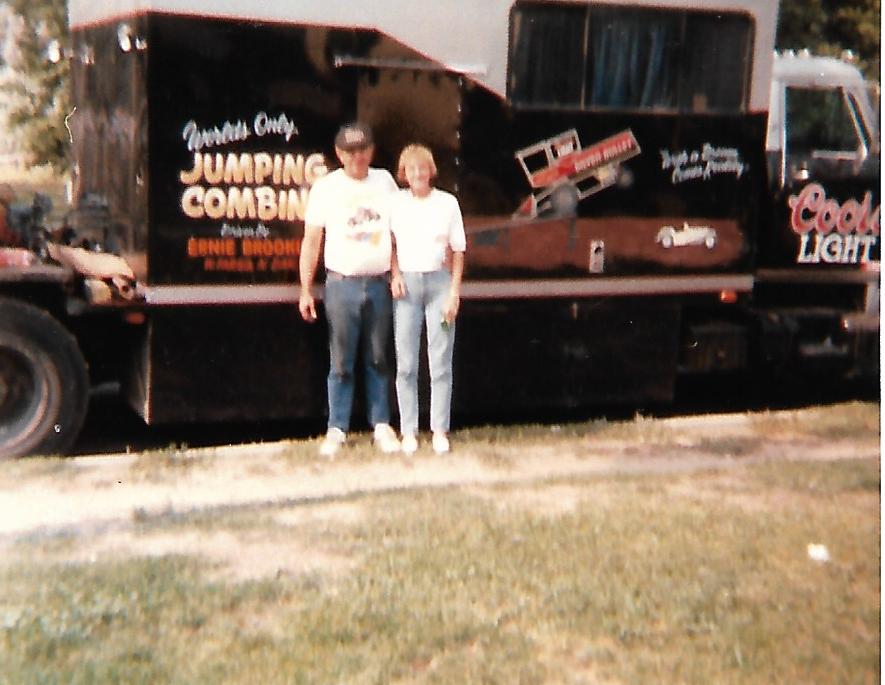 Awesome pics and history Gail! Thanks so much for sharing! I’d love to talk with you more about the combine and truck…can you email me: greg@machinerypete.com or text me: 507-358-2671. So much audience interest in your story. Thanks!! 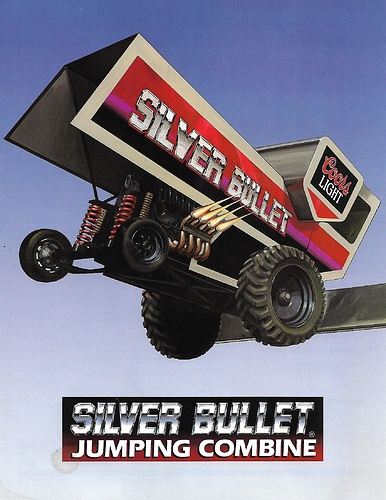 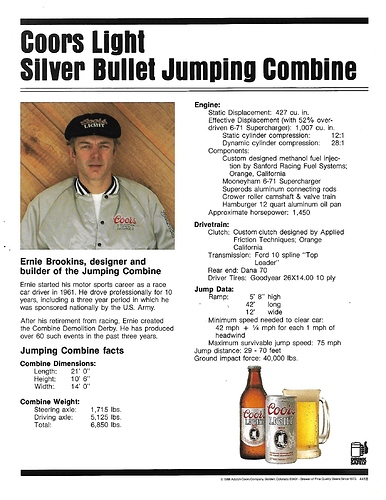 Yes, we love to talk about the combine and all of our other toyw.

Seen it in Manitoba a few times, Brandon and Carman. The one time in Brandon, it crashed and landed on it’s side. It’s at the end of this video. Trak Attack was there too, but had transmission issues and didn’t perform.

At the end of this video, there is a feature about the jumping combine.

That’s eally cool, Trevor! You have video of both nights from the show Ernie & I promoted in the Keystone Center in Brandon in 1987. One night the combine made a perfect jump; the other - not so much! We only rolled the combine twice. That one in Brandon, and one in Kenosha, Wisconsin; which just happened to be the last jump we had booked for the combine, and it just rolled over and was done.

Sorry for delayed response. The message was in my spam folder. I might be interested in selling the truck. How would I reach them or they reach me?