Grew up with orange tractors, always liked them

You are not alone. Everywhere I go I run into Allis Chalmers lovers. Have you ever been to the “Orange Spectacular” annual summer event in Hutchinson, MN? I hope to go with our TV film crew one of these years to capture some great AC stories, here’s link to the event: http://www.orangespectacular.com/. Here’s another great Allis Chalmers collectors web site: http://theallisconnection.com/upcomingevents.html

If you love ORANGE, hope you caught this Youtube video I posted last summer, preview walk through of an amazing Allis Chalmers collection in Wisconsin, including the very last Allis Chalmers tractor that rolled off the assembly line, a 1985 model 6070 with < 100 actual hours on it, click here to watch the video: https://www.youtube.com/watch?v=BQ6SF36fVAo&t=343s 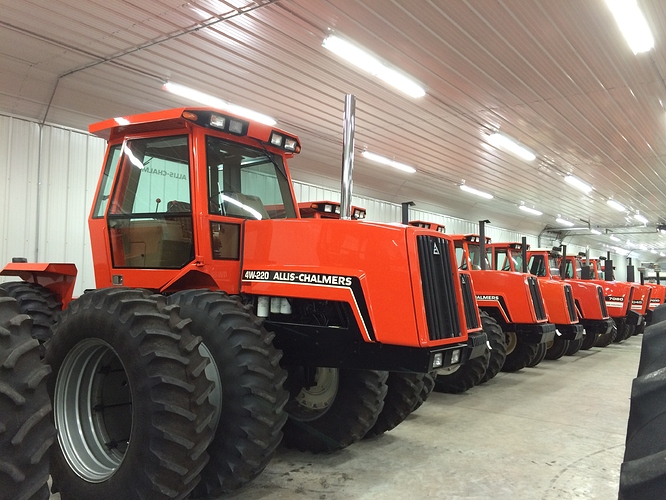 Just bought an Allis Chalmers 170, looking for a front-end loader?

When we went to JD and Case from Allis it sure made our fuel supplier happy. Those Allis were really great on fuel.

yes they were. had great governors on the gas engines as well.

When Agco did the deal with Cat I thought the existing Agco dealers got the short end of the deal. The Cat dealers got White planters and a lot of other Agco stuff and the existing dealers did not get to sell the Track tracors. A 95E in Persian Orange would be sweet.

true, was sad to see the orange go away. Our last was a 180 diesel, nice tractor. I did run a 190xt diesel one summer for a harvesting company, many years ago now but was a good tractor.