NEWS RELEASE: JCB yesterday set a new British speed record for tractors with a modified version of its JCB 8000-series Fastrac. The tractor achieved an average maximum speed of 103.6 mph over two runs at Elvington Airfield in the United Kingdom. Television and motor sports personality, Guy Martin, was behind the wheel. 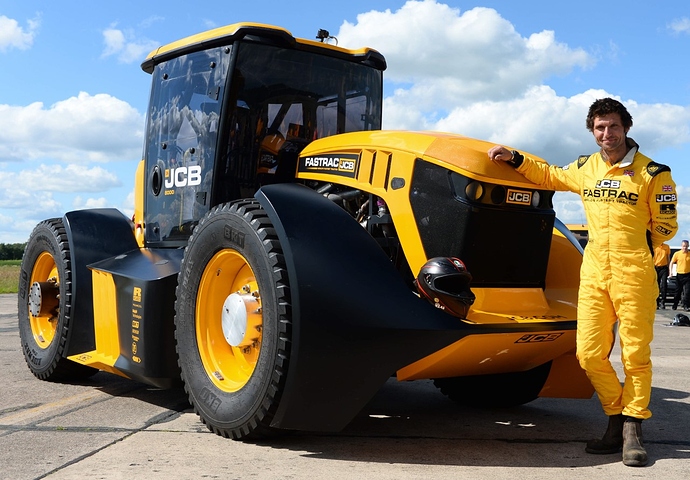 The previous record was 87.27 mph, set in March 2018 by a crew from the BBC television series, Top Gear.

A team of JCB engineers have worked in secret for several months to develop the tractor, which JCB chairman, Lord Bamford praised as an “amazing achievement.”

“We’ve long harbored a dream to attempt a speed record with the Fastrac and the whole team has worked tirelessly to achieve this amazing result,” said Lord Bamford. “I’m extremely proud of what they have achieved in such a short space of time. It really does highlight the skills and innovation we have in our engineering team. They have done a truly fantastic job.”

The record-breaking Fastrac is powered by a modified 7.2 liter, 6-cylinder JCB DieselMax engine that produces 1,000 hp and 2,500Nm of torque. Additional modifications, including weight reduction and aerodynamics, were performed with the assistance of Williams Advanced Engineering.

The speed record came exactly 28 years to the day after the first JCB Fastrac tractor rolled off the production line. Today, JCB Fastracs are the fastest production tractors in the world—with a top speed of 43 mph—and reflect the company’s goal to offer the most productive, versatile, comfortable and safe tractors on the market. JCB offers five Fastrac models in North America, each with full front and rear suspension, external disc brakes and unique, full chassis construction.

JCB is no stranger to land speed records. In 2006, the JCB DieselMax streamliner set a world diesel-powered land speed record when it reached 350.092 mph on the Bonneville Salt Flats in Utah; the record still stands.