Pretty near every week someone reaches out to me with the story of their search for a special family tractor that was traded away or sold years ago. Finding dad or grandpa's favorite tractor can be like the quest for the Holy Grail.

Sometimes these stories have happy endings.

Such is the case with Jerrod Baird of central Illinois. Jerrod reached out to me yesterday in hopes of help in finding his grandpa's John Deere 4520 tractor with Kinze repower. Before I could barely reply to Jerrod's Facebook message to me, turns out he had actually found it, courtesy of an amazing string of events, conversations and with the help of Facebook. Here are a couple pics of Jerrod's grandpa's 4520 with Kinze repower from back in the day: 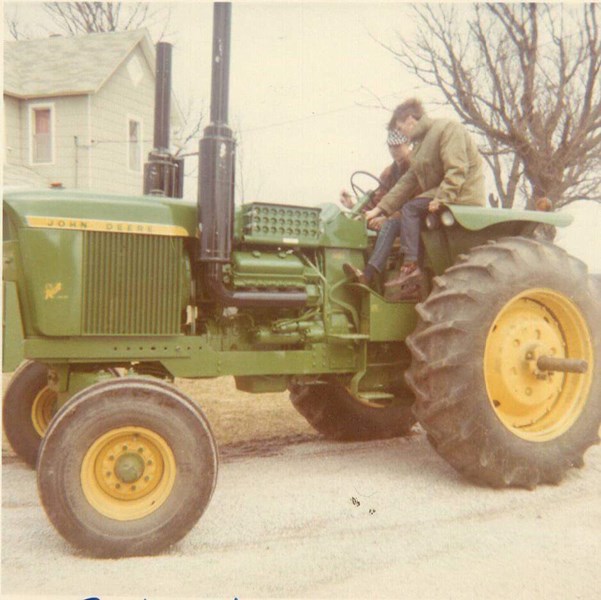 I'll let Jerrod pick up the story...I think things we can learn from Jerrod's experience, determination, keep trying, keep talking, keep looking. This was Jerrod's note to me yesterday, before he found it:

"To give you a bit of background, my grandpa, Jerry Baird of Sadorus, IL, bought this tractor in I believe 1968, ran it for a year, and realized that it was just under powered for what he needed to do with it. He got hold of Jon Kinzenbaw and decided to have it sent off to get it repowered just a year later."

"I’ve gotten hold of the dealer that he traded it off to and they have no records of it, and I’ve actually gotten hold of Jon Kinzenbaw and he has no records of it either. Unfortunately all of the records are long gone. My grandpa passed away back in 1994 and my grandma pitched all of her records from the mid 70’s and prior. My dad was too young to remember where it went but my Uncle thought that it went down to the southern IL area (Little Egypt). (Just found out about an hour ago that the semi driver at our local Sloan Implement dealer in Atwood, IL delivered it back in the mid 70’s to the next buyer down in Southern IL in Anna Jonesboro.) I have no serial number but I’m hoping that this may help!

I would absolutely love to find this tractor for my dad. It’s one of those things... I hear the stories of my grandpa going out to plow early in the morning and it was said that people could hear it for miles. They always knew when my grandpa was out working ground. I would love to honor his memory by finding this beauty.

Thank you from the bottom of my heart Pete!"

....Ok, now here's Jerrod telling me the rest of the story on how he found grandpa's John Deere 4520:

"It’s kind of crazy how it all happened, once we went down the right path we found it almost instantly. It started out with my dad seeing a picture of Jon Kinzenbaw with one of his repower tractors in the classic farm tractors calendar a couple years back. That sparked his memory of the 4520 that my grandpa had redone by Kinze back in late 1970/early 1971.

He started wondering what had ever became of it so he started the hunt for it. My grandpa passed away back in 1992 so thinking that she might have the records of it, my dad went to my grandma. Unfortunately she had gotten rid of all records from the mid 70’s and prior. He then went on the internet periodically over the next year and looked around but really couldn’t find much. About a year ago around this time, my dad went to a family friend of ours, Lance Little, and asked him if he could help. That’s when I found out that he was on a hunt for his dad’s 4520 repower.

I spoke to Lance yesterday actually and he now has 17 repower tractors. Once again we couldn’t really find much because still we had no records of it and of course no serial number to track it down. Our next lead came from Greg Ealy, a guy who works at the local Ford garage here in town. Greg farms with the family who owned the dealership where we thought the tractor was traded to. The dealership has been sold but the gentlemen, Bill Coffey, who owned it was still around. I went to Greg in hopes that I could possibly get Bill’s phone number and talk to him and even meet with him. I ended up telling my dad that Bill was available to meet and we needed to go see him.

I remember that morning so vividly. We went to see Bill and my dad was telling him all about it, but yet Bill told us that he never had a repower come through his store. My look of hope went somber pretty quickly. Granted the tractor was not there, I am still so happy that we went down there because Bill, my dad, and I had a great conversation. My grandpa used to deal with Bill back when he was alive and my dad would always go to the store with him. I remember my dad walking in and saying, “Bill, do you remember who I am?” And Bill stepped out of the light and stated, “Remember you? How could I forget you?” He is 87 years old and still sharp as a tack.

Once we left, my dad’s hopes of finding this tractor once were gone, but I was determined to find it for him. I told my dad that morning on our way back to the farm, “If I accomplish one thing in life it’s to find this tractor before I die and I will.” And I meant it.

Still with no serial number I continued my search. I was telling Lance again how it seemed that each road I went down it seemed like it was another dead end. He then gave me a phone number of a man named Gerry, Kinze’s right hand man and told me to give them a call because Kinze may have some old records of the tractors that he repowered. Once Gerry and I finally spoke on the phone (we played a lot of phone tag) I found out that Gerry had talked to Jon himself and all of the old records from the 20 series tractors had been burnt unfortunately. This was yesterday on my way out to the farm.

As I was sitting at the table in our shop I knew that there had to be something else that I just wasn’t doing. I joined a old John Deere collectors page on Facebook and decided to post the old pictures and story (the original post that you saw) in it. So many good people shared my post and a man named Chuck Binder saw it. Turns out this guy is the semi delivery driver for our local Sloan Implement dealer in Atwood, IL. He said that back in the day he worked for the dealer where that tractor was traded to. He couldn’t remember any names but remembered the area where it went.

Now I knew we were getting somewhere.

I privately messaged Chuck and asked him if he could remember the town it went to and he told me that he did. I was telling my dad and one of his best friends about it and my dad’s friend (Kirk Rogers) goes, “I know someone from there.” He then called the guy that he knew and guess what... he knew about the tractor we were hunting down.

I couldn’t believe it.

My next step was getting his friends phone number. I asked if I could get it and of course he said no problem. Finally, I called Jim, the current owner, and asked him if he owned a 4520 Kinze repower and he then proceeded to tell me yes he did. The next words out of my mouth I will never forget... I waited a second with tears in my eyes and then said,

“That was my grandpa’s tractor. He had that done by Kinze himself.”

His response was, “You’ve got to be kidding me.” We talked for about 20 minutes, exchanged stories, emails, phone numbers, friended each other on Facebook, and will remain friends with a bond over a John Deere 4520 repowered by Jon Kinzenbaw and an amazing story to go with it." 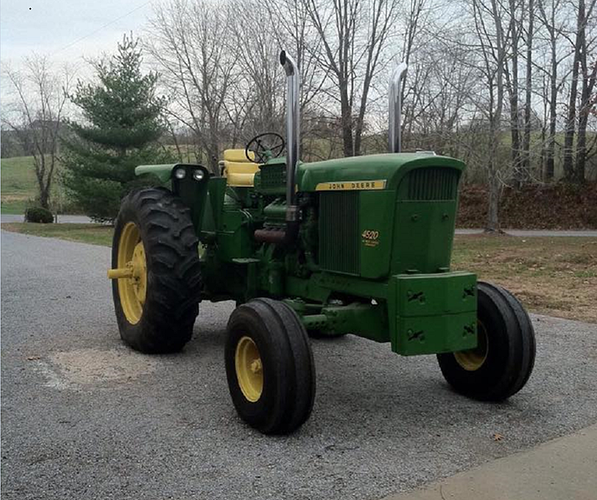 And here was Jerrod's reaction on Facebook upon finally tracking down and seeing his grandpa's 4520:

"It’s beautiful! Still in shock that I’m looking right at it. I can’t wait to see it in person! My dad was shocked that that after all of these years of wondering what became of it that he will get to see it again. It’s been 41 years! He spent a lot of time riding on it with my grandpa."

I love a good reunion.